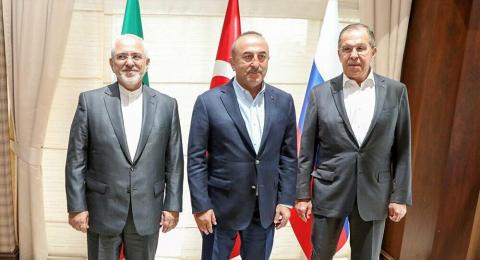 The foreign ministers of Turkey, Russia and Iran will hold a teleconference meeting on April 22 to discuss the developments in the Idlib province of Syria amid a fragile ceasefire between the Turkish army and Syrian regime forces.

The three-way mechanism was established in early 2017 with the objective of reducing the violence, eliminating terrorist elements and boosting a political solution to the nearly a decade-old conflict.

The meeting comes as a Turkish-Russian deal brokered on March 5 that stipulates the cessation of military activities in Idlib still holds, but amid reports over provocative moves by radical jihadist organizations as well as the Syrian regime forces' attempt to break the truce.

President Recep Tayyip Erdoğan urged both the Syrian regime and terror elements not to carry out provocative moves at a press conference late April 21, after an online cabinet meeting.

"We see that the Syrian regime, which seeks to take advantage of the fact that the world and Turkey are now focused on the fight against the pandemic, has increased its aggression in Idlib. Even though Turkey remains committed to the March 5 Memorandum reached with Russia, it will not allow aggression by the regime," he said.

"The regime will have to pay for it with heavy losses if it continues to violate the ceasefire and other terms of the memorandum. We will not tolerate shady groups that engage in provocative activities in an attempt to disrupt the climate of ceasefire in Idlib, either," added the president.
It is believed that...