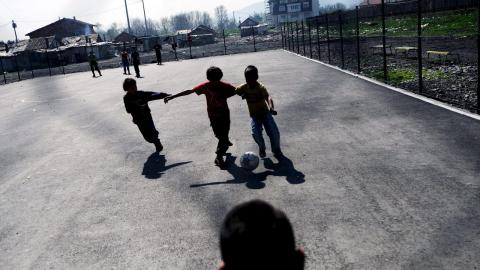 But the National Operational Headquarters says the areas must remain under lockdown, and testing there should increase, as six out of the 40 deaths related to the virus are connected to the neighbourhoods. The high density of population there also adds to official concerns.

As a result, people living there may only enter and leave after presenting an ID and a work contract, if their work requires them to leave the area. Similar measures were imposed in another Roma neighbourhood in the town of Peshtera on April 4, after four cases were reported there.

Many Roma feel restive under these tough restrictions. On Thursday last week, the website Mediapool.bg reported struggles between police and several drunk youngsters who tried to pass through the border gate.

And on Friday, a number of people went outside wearing protective masks and keeping the standard two-meter distance between them, demanding better conditions and claiming they had lost work because of the lockdown.

Some demanded the resignation of the government. Mediators, who were trying to ease the situation, tried to dissolve the crowds.

An article in the newspaper Capital Weekly said the mediators reported that most of the people involved were respecting the safety measures, and those who break them are usually youngsters.

One persistent problem in some areas is the lack of running water. Both Sofia neighbourhoods were well disinfected in March but mediators report that hygienic goods remain in short supply. It's not clear how the lockdown in the two Sofia neighbourhoods is affecting the distribution of food and...