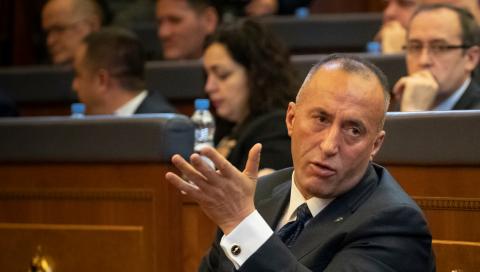 After the heads of the Democratic League of Kosovo, LDK, Isa Mustafa, and the Alliance for the Future of Kosovo, AAK, former prime minister Ramush Haradinaj, on Wednesday agreed to work on creating a new coalition government, President Thaci said he would give a mandate to form a government to whatever coalition was able to assemble a majority.

"They have agreed that Kosovo needs a new government with a majority in parliament as soon as possible," AAK Secretary General Besnik Tahiri said after the LDK-AAK meeting. Outgoing Prime Minister Albin Kurti's government fell in a no-confidence vote initiated by its LDK partners in March.

After meeting the political leaders, President Thaci signalled his approval: "As a result of your expressed will for the country to have new government .. fully respecting the constitution and the laws of Kosovo. I will give it (a mandate) to the party or coalition that proves to have a majority in parliament."

Tahiri added that details about the new coalition have not been discussed as yet.

The LDK, AAK and NISMA together have 47 of the 61 seats in the 120-seat parliament they need for a majority.

Now they need either the 10 votes of the Belgrade-backed ethnic Serbian party Lista Srpska plus the 10 votes of other minority representatives - or the support of Kadri Veseli's former ruling Democratic Party of Kosovo, PDK.