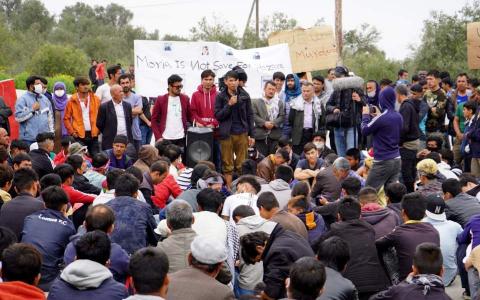 Asylum seekers residing at the reception and identification center in Moria, Lesvos, staged a protest on Wednesday asking Greek athorities to be moved off the island, as they fear they risk being infected with the coronavirus by staying in the overcrowded camp.

The protestors stood outside the camp holding banners that read "Freedom for all. We are exposed to Covid-19."

The action comes as the governent announced it will relocate some 1,500 residents of Moria to the mainland on Saturday.

The migrants will be the first out of a total of 2,380 members of vulnerable groups, such as the elderly or those with underlying ailments, who are to be moved out of island camps over the next two weeks.