Bosnia Compiles List of Illegal Migrants Due for Deportation 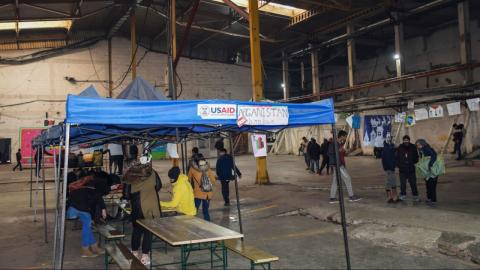 Bosnia's Service for Foreigners' Affairs, SFA, on the orders of the country's Security Ministry, has begun preparing a list of illegal economic migrants for deportation, Slobodan Ujic, the director of the SFA, confirmed to BIRN on Thursday.

Security Minister Fahrudin Radoncic has ordered the SFA to compile a list of the estimated 9,000 to 10,000 illegal migrants to be deported, excluding refugees from war-torn Syria.

"This is a huge security problem that is destroying the lives of our citizens, both in Sarajevo and in Bihac - everywhere," Radoncic said on Wednesday, referring to the migrant hotspot of Bihac, in the northwest of the country, near the EU border.

"As security minister, I demand that .. all those migrants who came from countries that are richer than Bosnia be deported," he added.

The minister explained that he had asked those countries to give Bosnia money to cover the cost of the air flights that would take them back to their home countries. He also said that the money the European Union currently gives to Bosnia to keep illegal migrants inside the country should be used to fly them out of Bosnia instead.

Ujic explained that the list of people to be deported mainly refers to illegal migrants from countries like Pakistan, Afghanistan, Algeria, and Morocco.

"We are working on two things. The first is a survey to determine which migrants would agree to be voluntarily returned to their country, and the second is to identify the migrants' identities," Ujic told BIRN.<...