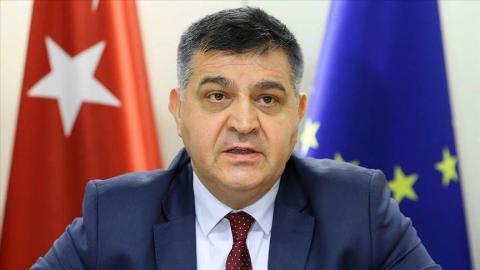 Despite political obstacles, dialogue between Turkey and the EU has benefited amid the mutual fight against the novel coronavirus pandemic, a senior Turkish diplomat said on April 22.

Speaking via webinar in a program titles European Union and Turkey-EU Relations in the COVID-19 process, Turkish Deputy Foreign Minister and Director for EU Affairs Faruk Kaymakcı said: "COVID-19 has led to an increase in dialogue that was blocked politically between the EU and Turkey. We hope we can get more effective results."

Kaymakcı noted that a donors' conference would be held on May 4 on the development of a vaccine and treatment, adding that European Commission President Ursula von der Leyen could hold a phone call "in the coming days" with Turkish President Recep Tayyip Erdoğan to request that Turkey "take an active role in this conference."

On the initial response of some EU members to the outbreak, he said that "many countries could not predict that the crisis could reach this point."

When the pandemic crisis started in Europe, EU countries started taking precautions against each other without consulting the EU, said Kaymakcı.
Kaymakcı also said that though the pandemic relegated the issue of migration between Turkey and the EU to a lesser priority, it would reemerge in the long term.

"We hope that a new agreement on migration is made between Turkey and the EU in the coming weeks," he said.

Additionally, he underlined that as part of the measure against pandemic, 32,000 Turkish nationals so far had been brought home from 76 countries.

"We are not only bringing our citizens [back] to Turkey, but also helping citizens of other countries in Turkey to return to their countries," he said.