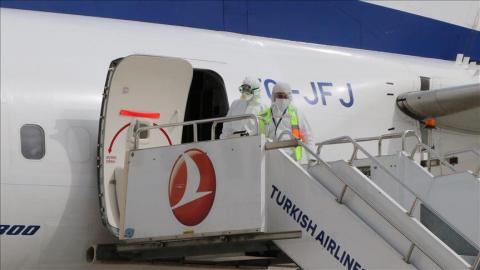 Turkey evacuated more than 1,700 of its nationals on April 23 from all over the world amid the coronavirus pandemic.

Separately, a total of 182 Turks were evacuated on a flight from Sudan and landed in Batman province. Following health checks, they were sent to Siirt province.

Turkey evacuated 344 of its citizens on a flight from Algeria which landed in Gaziantep province. A flight carrying 182 Turks from Germany landed in Adana province.

Separately, a total of 329 people, including 279 Turks and 50 German nationals who have family ties to Turkish citizens, were evacuated on a flight from Germany which arrived in the capital Ankara.

A total of 166 Turks were evacuated on a flight from Jordan and landed in the Black Sea province of Samsun.

All of the evacuees were housed at student dormitories for a 14-day quarantine in line with the country's strict measures to stem the spread of the virus.

At the instruction of President Recep Tayyip Erdoğan and in coordination with the Foreign Ministry, Turkey will bring back nearly 25,000 citizens before the Muslim fasting month of Ramadan begins later this week.