Turkey brings back over 3,000 citizens before Ramadan 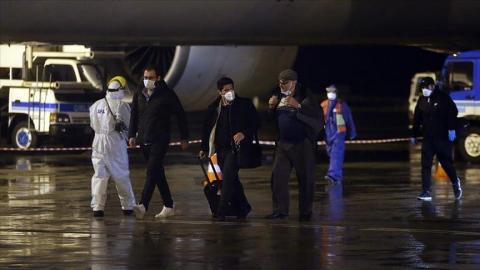 More than 3,000 Turkish nationals were repatriated from cities around the world April 23 as part of an initiative by
Ankara amid the coronavirus pandemic.

After routine health checks were coordinated by the Disaster and Emergency Management Authority (AFAD), they were brought to dormitories in several cities in Turkey to be quarantined.

Separately, 182 Turks were evacuated on a flight from Sudan and landed in Batman province. Following health checks, they were sent to Siirt province.

A flight carrying 94 Turks from Serbia landed in Kütahya province.  Turkey evacuated 344 of its citizens on a flight from Algeria which arrived in Gaziantep province.

Meanwhile, 509 people, including 50 German nationals with family ties to Turkish citizens, were brought back on flights from Germany which arrived in the capital Ankara and Adana province.

A total of 166 Turks were evacuated on a flight from Jordan that landed in the Black Sea province of Samsun.

Some 291 citizens from Uzbekistan, 295 from Saudi Arabia, 249 from Oman and 349 from Canada were brought to dorms in several Turkish cities.

A total of 217 citizens who were kept in quarantine for 14 days at a dorm in Turkey's Black Sea province of Trabzon also returned to their homes.

They had been brought back from Canada, Kuwait and Georgia.