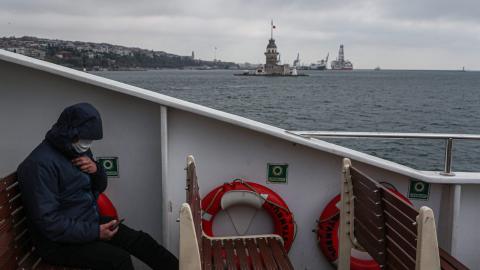 Critics of the AKP and its leader, President Recep Tayyip Erdogan, say they are exploiting the COVID-19 pandemic to exact political revenge for the party's loss of most major cities in Turkey to the opposition in last year's local elections.

Erdogan, they say, is determined to prevent the likes of Istanbul mayor Ekrem Imamoglu from making further gains.

"Local leaders, where the pandemic is centred, come to the fore in every country," said political scientist Sezin Oney.

"All eyes are on New York in the US, Bergamo in Italy and Istanbul in Turkey and naturally Istanbul's mayor, Ekrem Imamoglu, comes to the fore," he said.

"Losing Istanbul was very painful for Erdogan and this pain is felt again in such a crisis."

According to official figures, as of April 21 Turkey had more than 95,000 confirmed cases of COVID-19, lifting the country above China to become the seventh most-affected country in the world. Some 2,259 have died.

On April 20, Erdogan announced fresh measures to curb the spread, including a four-day curfew. Earlier in the month, the Interior Ministry banned municipalities from collecting their own donations to help those most affected by the pandemic, and blocked the bank accounts used to do so.

Erdogan has taken aim at opposition-run municipalities, accusing them of forming a "parallel state" and using "terrorist" methods to undermine the government's efforts. All measures, he said, must be taken and run by the central government, which has launched its own campaign to raise donations. "Fighting the pandemic requires central...