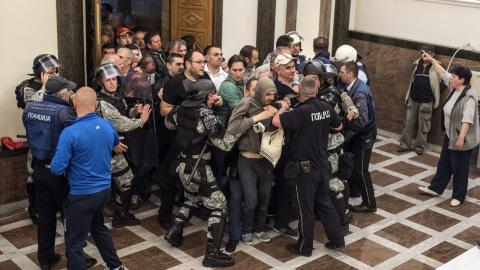 The then opposition leader who later became the Prime Minister, Zoran Zaev [c], was among the badly injured during the mob attack. Photo: EPA/STR

The parliament came under attack amid a tense political standoff between the allies and opponents of the former right-wing VMRO DPMNE government led by Nikola Gruevski.

Gruevski's allies and sympathizers stormed the parliament, trying in vain to prevent the new majority in the assembly from electing a new speaker and so forming a new government.

Some 100 MPs and journalists were hurt in the attack, some of them seriously, including then opposition leader who later became Prime Minister, Zoran Zaev.

One MP, Ziadin Sella, was knocked unconscious from the severe beating and barely escaped with his life.

The Social Democrats nevertheless managed to elect a new speaker and soon after formed a new government.

They accused VMRO DPMNE of a deliberately trying to destabilise the country in order to create an excuse for proclaiming martial law and suspending democracy, so that they could stay in power.

VMRO DPMNE has always denied this, insisting the attack on the building was spontaneous and was not organized by them.

Meanwhile, analysis confirms that while a number of the participants in the events have been put on trial, not one prominent figure was among them.

The first investigation, opened almost immediately after the events, in May 2017, was against some of the people who stormed the building.

Charged with "participation in a mob that committed a crime", nine participants in the attack were sent to jail under first-instance verdicts that were later confirmed.

Soon after, a separate...