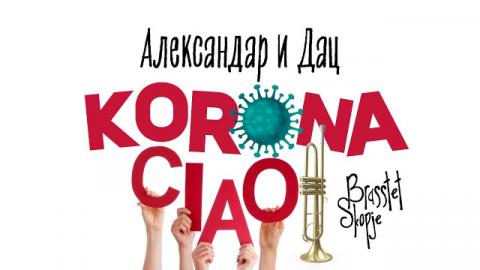 The cover of the popular "Belo Chao" by Macedonian actor Dragan Spasov-Datz and composer Alexander Mitevski was made in one day. From idea to realization. Corona Chao has blown up social media, and even Prime Minister Boyko Borisov has identified himself as a duo fan. In just one day, the video garnered over 372,000 views on youtube.

"It's all done for good humor and with a lot of love. The spot was filmed under quarantine, in the participants' homes, with no professional cameras and lighting. It was filmed with phones and the editing was done by the music team. Part of Dats and Mitevsky on Facebook. Enjoy and sing with us, "the authors write.

Dats is one of the most famous theater and film actors in Northern Macedonia. He is a graduate of the Faculty of Dramatic Art at Skopje University of St. Cyril and Methodius in the class of Prof. Slobodan Unkovski. From 1992 to 2016 he worked at the Drama Theater-Skopje, and then became part of the troupe of the Macedonian National Theater.

The two admitted that a couplet from the song "Corona Chao" was inspired exactly by Borisov, who made a note to a reporter that he was coughing.

This is not the first project of the two. Last year, they did a duet for the Skopje Music Festival, which then received an Italian version from tenor Blagoi Naumoski.

In the video of "Corona Chao" also participates Bastet Skopje. This is a brand new formation that is coming together last year, but is already very popular.

His conductor is Goran Ilievski, who also makes arrangements. Playing trombone. He is also a conductor in the Army Orchestra of Northern Macedonia.

Bulgaria PM at Odds with President and Partners over North Macedonia

Divisive Statue of ‘Assassin’ May Return to North Macedonia

President Radev: It is High Time to Stop the Anti-Bulgarian Ideology in North Macedonia

Influx of Anti-Bulgarian Rhetoric by the Macedonian Elite