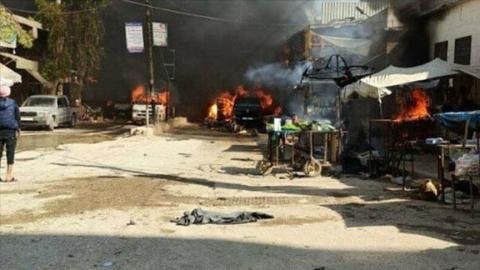 Turkish officials and international leaders condemned a terrorist attack by the YPG in Afrin in northwestern Syria that killed dozens of civilians, including children on April 28.

"I condemn the heinous terrorist attack on this holy day of Ramadan. I wish Allah's mercy upon the martyrs and a quick recovery for those wounded. Innocent civilians' and children's blood are on the hands of those who support and remain silent in the face of actions of this terrorist organization," Turkish Vice President Fuat Oktay said on Twitter.

"The heinous terrorist organization PKK/YPG slaughtered innocent civilians, including children, even on this holy day of Ramadan," he wrote on Twitter.

"Wishing Allah's mercy upon the deceased. Those who support the terrorists and trying to take it off the terror list are also responsible for this cowardly attack," Çavuşoğlu added.

Interior Minister Süleyman Soylu said the "treacherous terrorist organization will not get away" with the attack carried out in Afrin during Ramadan.

The bombing in Afrin drew condemnation from the international community.

"The United States condemns the act of terror carried out today in Afrin, Syria, claiming the lives of dozens of people shopping in the central market as they prepared to break the Ramadan fast. Initial reports indicate many victims were civilians, including children," said State Department spokeswoman Morgan Ortagus in a statement.

Secretary of State Mike Pompeo said on Twitter that the U.S. renews its call for support and implementation of a nationwide cease-fire in Syria after "today's cowardly act of terror carried out on...