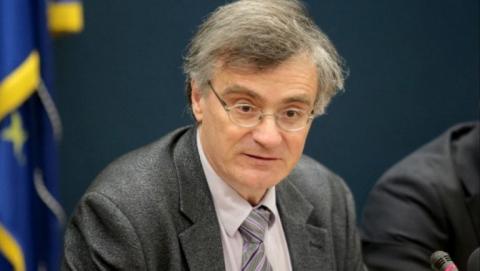 Tsiodras' 29 April news conference was different than all the others as he offered a defence (hence the title from the seminal work of the major 19th century British intellectual John Cardinal Newman) of the committee's work and tough decisions throughout the lockdown.

Aside from the necessary accounting yesterday was devoted to explaining  the specific measures to be implemented to unlock the country and to to defending  his own role during the five-week lockdown, including what many charge were errors in judgment which he insists  were merely based on the less comprehensive data available at the time..

Tsiodras as chairman of the government advisory committee and personal advisor to PM Kyriakos Mitsotakis has drawn the spotlights of public attention and  the domestic and international press has beatified him.

His mild-mannered and somewhat removed delivery soothed anxieties but was punctuated by his occasional stern rebukes of the press - either for interrupting or asking a question which he believed disoriented the public or drew unfounded conclusions.

They describe him as anything from a national father-figure although he seems more like  the lost scientist-uncle who emerged after many years to guide the family through rough waters.

At a daily, nationally-televised news conference he rattles off the latest data on deaths, intubations, and demographics  with locomotive speed and then expands ...

Religion, rights, and geopolitics on Vartholemos’ US visit, meetings with Biden, Blinken, Pelosi