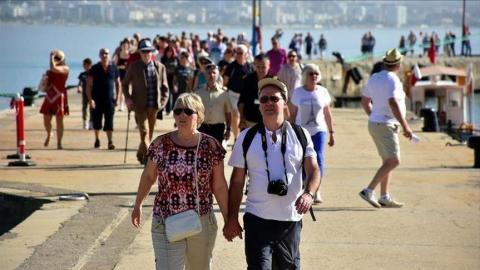 Turkey welcomed 4.24 million foreign visitors in the first quarter of 2020, the country's Culture and Tourism Ministry said on April 30.

The number of foreigners visiting the country dropped by 22.1% on a yearly basis in the quarter, the ministry data showed.

After the COVID-19 pandemic, which originated in China last December, tourism and aviation sectors took a backseat

due to restrictions on travel. Turkey's flag carrier Turkish Airlines also suspended all flights till May 28.
COVID-19 has spread to at least 185 countries and regions across the world. Europe and the US are currently the worst-hit.

Edirne, in northwestern Turkey, which borders both Bulgaria and Greece, saw the second-highest number of foreigners, with 540,261 in the January-March period.

The Mediterranean resort city of Antalya followed them with 10.18% or over 431,653 foreign visitors last month.

In the first month of 2020, the tourist number hit the highest January figures with 1.8 million foreign visitors.