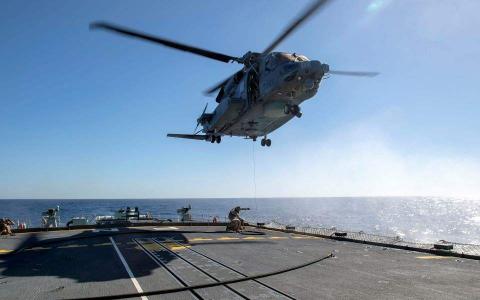 Additional remains have been found and five missing Canadian military members from a helicopter crash off Greece are now presumed dead, the Canadian military said Friday.
The Canadian Armed Forces said in a statement that NATO's search and rescue efforts are now a search and recovery effort.
"Additional remains have been discovered during the search, but cannot be identified at this time," the military said.
Officials previously recovered the body of Sub-Lt. Abbigail Cowbrough and said the missing five members who were aboard the aircraft are now presumed dead. They include the pilots Capt. Brenden Ian MacDonald and Capt. Kevin Hagen, the Air Combat Systems Officer Captain Maxime Miron-Morin as well as Sub-Lt. Matthew Pyke and Master Corp. Matthew Cousins.
The Cyclone helicopter was deployed on board the Halifax-class frigate HMCS Fredericton and was...