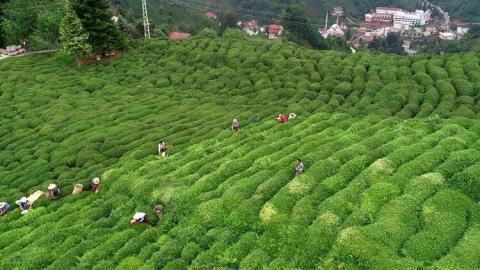 Tea growers in the eastern Black Sea region are desperately looking for workers to harvest tea on their land plants after authorities have introduced curbs on travel and limited entrance to and exit from the cities.

Potential tea plantation workers are offered a salary of 6,900 Turkish Liras (around $1000) and all social security benefits.

Recently, the officials restricted movements of some 100,000 people, who live in Istanbul but want to travel to the Black Sea provinces, to harvest tea in their land plots there, in a bid to curb the coronavirus spread in the region.

On top of that, this year some 40,000 foreign workers will not be able to come to the region to pick tea as borders are closed.

Special "harvest commissions," under the supervision of the district governors, will be set up in those Black Sea regions to ensure that the tea harvest is not interrupted this year.

In the province of Rize, the municipalities, the chambers of agriculture and growers' associations, under the coordination of the governor's office, are working on a road map.

In the Fındıklı district of the city, the local municipality, the chamber of agriculture, the muhtars' (village heads) association and the city council formed a body to find a solution to the problems. Members from this body travel to the district's villages to find at least 2,000 workers to harvest the tea this season.

They offer potential workers a monthly salary of up to 6,900 liras.

Potential workers include university students, who have returned to...