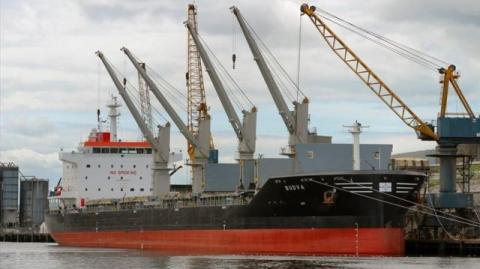 On May 2, port of Hamburg police found 500 kilos of cocaine hidden in the cargo area, while one of the crew members was arrested. German police arrested Mladen Radulovic from the Montenegrin coastal town of Bar, while other 22 were questioned.

The chief of the Montenegrin state shipping company Barska plovidba, Tihomir Mirkovic, said the ship sailed with all necessary permits and underplayed the seriousness of the situation.

"The ship was not detained and the company had no losses. Only one crew member was arrested for the seizure of drugs on board while no other arrests were made," Mirkovic told the public broadcaster.

The ship had arrived at Hamburg from Santos Brazil via Casablanca in Morocco.

On May 2, the police directorate reported that they had cut drug trafficking links between South America and Europe. The Hamburg drugs bust and arrest were announced as the final result of a joint counter-drug operation involving law enforcement agencies of Montenegro, Britain, the Netherlands and the United States Drug Enforcement Administration, DEA.

On May 3, Montenegrin Prime Minister Dusko Markovic said the Budva had been leased to a foreign company since the first day of its acquisition. "The ship was never operated by a Montenegrin company. The drug seizure action was carried out with partner services and we have received praise from EU Member State Ambassadors for this action," Markovic told the television station Nova M. A London-based company, Sea Pioneer, which Barska plovidba has been cooperating with since 2014, was operating the ship, Markovic said.

Earlier, on April 22, a midshipman of the Montenegrin armed forces,  Dusko Radenovic, was arrested for...