Violence and Hunger Stalk Refugees and Migrants in Albania 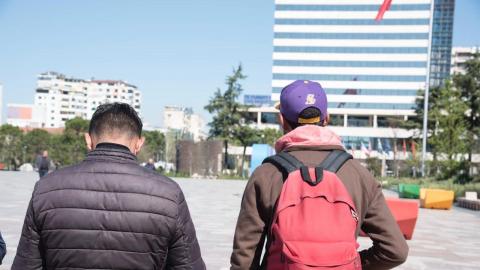 Some spoke of dire conditions in the centre and the growth of gangs stealing from and assaulting other residents.

Others, migrants trying to reach Western Europe, said they had been left out in the cold despite seeking refuge at the centre, its doors closed under a lockdown across the country to confront the coronavirus pandemic.

Allegations of state negligence in Albania's handling of foreign refugees are not new, but complaints have escalated with the tenfold increase in the number of migrants and refugees arriving in the Balkan country over the past three years.

Concerned human rights activists warn the failure to provide refugees with sufficient food and shelter is a violation of Albanian's international obligations.

"Failure to meet the minimum housing and food standards is a violation of the refugee convention," said Erida Skëndaj, executive director of the Albanian Helsinki Committee.

"Despite being poor, the Albanian state has an obligation from the international conventions it has signed to meet the minimum standards, even to give them pocket money," Skëndaj told BIRN.

The Albanian Ministry of Interior disputed the allegations.

"Our structures at the centre are doing their best to serve asylum seekers from morning till night, not only with food but also with medical assistance," said Deputy Interior Minister Rovena Voda, who is responsible for refugee and asylum issues.

The National Reception Centre, in a written response, did not address BIRN's questions concerning food provisions but did acknowledge incidents of physical violence which it said had been resolved with the help of police.