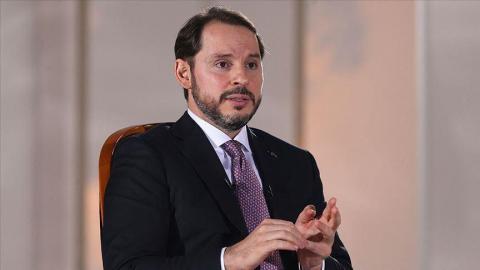 Turkish Treasury and Finance Minister Berat Albayrak has ensured international investors that Turkey's reserves are sufficient and Ankara has been holding swap line talks with other countries.

The country has adequate reserves to meet its engagements, he said on May 6 during a closed-door online meeting with international investors, adding that banks and the private sector were easily able to roll over their debt.

Albayrak said that the Turkish Treasury has only $4.7 billion of remaining debt, which will be rolled over in 2020.

Turkey is conducting talks to establish swap lines with members of G20, with more than one swap line possible, said the country's treasury and finance minister.

"We are doing one-to-one swap negotiations with G20 countries with which we have a trade deficit and a free trade agreement," he said.

Saying that it would not be appropriate to comment on the negotiations before they concluded, "it is highly possible to make swap agreements with more than one country."

He reiterated that Turkey has no plans to negotiate a financing program with the International Monetary Fund (IMF).
In November 2019, the Turkish Central Bank and its Qatari counterpart raised the limit on the existing currency-swap arrangement to $5 billion from $3 billion. Turkey also has a currency-swap deal with China, signed eight years ago and renewed every three years.

The COVID-19 pandemic had been brought under control in Turkey and the country had begun to ease measures gradually, noted Albayrak.

Despite the decline in exports and tourism, there will be no significant change in the current account balance due to falling commodity prices, the minister stressed.

He noted that economic activity would return to...