Russia will have no access to Turkish S-400s: Official 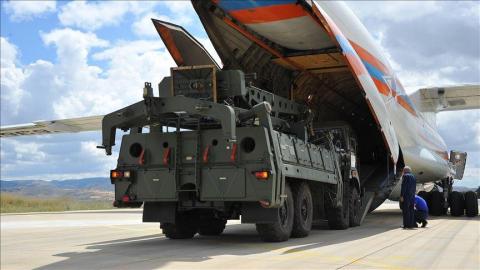 Russia will have no access to the S-400s after all the technical procedures are completed, the head of the Turkish Defense Industry has said, describing this as a "red line" concerning ongoing cooperation with the Russians on the air defense systems.

"Russian personnel will not have a free hand in accessing the S-400 batteries although training, maintenance and technical support are part of the procurement agreement [with Russia]. This is our red line. The Turkish Air Forces and Turkish companies will be those who have access to the systems," İsmail Demir, the chairman of the Presidency Defense Industries, told reporters at an online meeting on April 7.

Turkey deployed the S-400 systems from Russia in mid-2019 and was supposed to activate them in April 2020. Ankara has announced that the activation was delayed due to the coronavirus, but the process will move forward as planned, despite strong objections from the United States. Washington threatens Turkey with congressional sanctions and has already frozen its participation in the F-35 joint fighter project.

According to Demir, the installation process of the S-400s still continue and some of the systems have already been put into use. A new timetable to activate the S-400s would be drawn up once operations are back to full capacity after the outbreak, he was also quoted as saying by Reuters.

The chief of the Turkish Defense Industry informed that Turkey is still producing and delivering parts for the U.S. F-35 jets despite being suspended from the program nearly over a year ago.

"There was an understanding in the United States that nothing would be bought from Turkey for the F-35s after March 2020, but that...