Obradovic spent the night in the MP's office, Bozic and Martinovic outside PHOTO 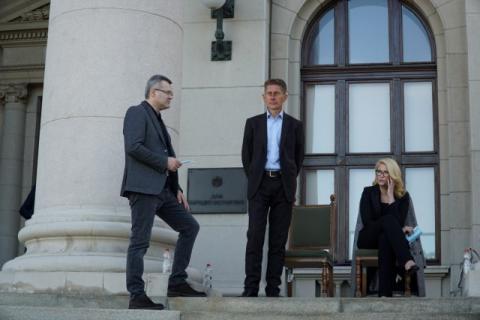 Opposition MPs Miladin Sevarlic and Dveri leader Bosko Obradovic began a hunger strike, and two SNS MPs, Aleksandar Martinovic and Sandra Bozic, joined in front of the National Assembly on Sunday.
Martinovic and Bozic said that they were reacting to the fascism of the leader of Dveri, Bosko Obradovic, when he physically attacked MP Marjan Risticevic, with a request that the prosecution react to Obradovic's outbursts. Risticevic was filmed with torn clothes after the incident in front of the Assembly, when Obradovic blocked the entrance with a group of sympathizers.
Obradovic spent the night in the MP's office, and just before seven o'clock he went out in front of the parliament, staying on the steps again. Photographs taken during the night appeared, in which he takes the bags, which the media say contained food. The leader of Dveri allegedly received blankets and pillows.

Sevarlic first decided to go on strike, and then Obradovic joined him, as a sign of support, as he first said, because of the alleged statement of the President of Serbia, a year ago, that he would recognize the independence of Kosovo.
Obradovic was "visited" last night in front of the Assembly by the president of the Party of Freedom and Justice, Dragan Djilas, and the Dveri...

Media: The patient collapsed and died while waiting in the COVID clinic in Vranje

"I didn't want to be prime minister at all, I'm an artistic soul"

Alarming situation in schools: Thousands of infected students and teachers

"We will face with a lockdown for the next two weekends"