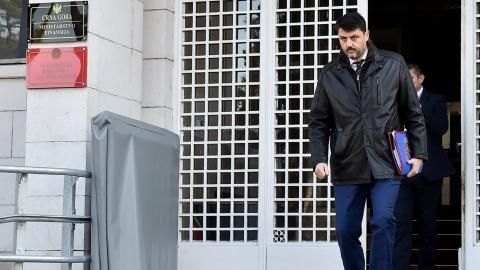 Bozovic said after the meeting at the ministry he had no intention of interfering in RTCG's editorial policies.

"I respect the state of Montenegro. But like all Serbian people, I am especially sensitive about the fascist Ustasa movement," Bozovic told media.

Montenegrin Foreign Minister Srdjan Darmanovic told a press conference on Tuesday that Bozovic's comments on Facebook, in which he called for those responsible for showing the video to be sanctioned, were unacceptable.

"Foreign ambassadors were not invited to interfere in who will be responsible for what in Montenegro," Darmanovic said.

Some political parties and civic activists have asked for RTCG managers to resign because the video was broadcast on May 9, which Montenegro celebrates as the Day of Victory over Fascism in Europe.

On Monday, the RTCG management punished the editors of the channel's morning programme and music programme by imposing 20 per cent salary cuts for the next two months.

"The editorial policy of RTCG was and will be the same, based on anti-fascist and European norms," the head of RTCG, Bozidar Sundic, said in a press release.

Concerts by Marko Perkovic - nicknamed 'Thompson' after the machine gun -regularly cause controversy in the Balkan region.

In May 2018, Perkovic was acquitted of a public order offence for chanting an Ustasa slogan, "Za dom spremni" ("Ready for the homeland") at a concert in the town of Slunj in Croatia.

In June 2017, Thompson held a concert in the Bosnian town of Mostar in support of former Bosnian Croat ex-officials on trial in The Hague for war crimes, where around 8,000 people chanted "Za dom...