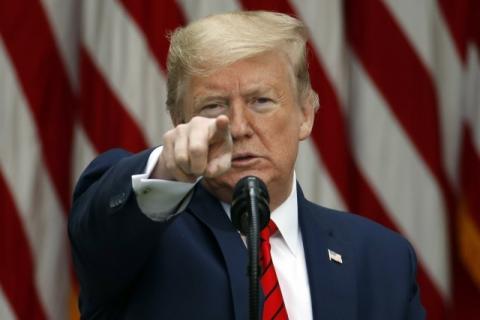 Namely, Weijia Jiang, a CBS News correspondent from the White House, asked Trump why he sees the current crisis as an international competition, when more than 80.000 Americans have died.
"Maybe that's the question you should ask China," Trump answered a journalist who was born in China and emigrated to the United States at the age of two.
"And maybe that's a question you should ask China. Don't ask me, ask China that question, OK?", Trump answered.
When Jiang tried to press him on why he said that to her, he tried to call on someone else and then ended the briefing.
"Sir, why are you saying that to me specifically?" Jiang asked in response.
"I'm saying it to anybody who would ask a nasty question like that," Trump said before moving on to another reporter while Jiang continued to press for an answer.
Trump called on CNN White House correspondent Kaitlan Collins, who tried to yield her time back to Jiang, prompting the president to call on someone else.
"I just wanted to let my colleague finish, but can I ask you a question?" CNN journalist said, trying to keep the floor.
However, when she approached the microphone, Trump refused to answer.
"But you pointed at me, you invited me to come forward," the journalist said.
Trump confirmed that, but he was not satisfied with her belated reaction.
"You did not respond to the call," the US president said, called on someone else and then ended the briefing abruptly.

GOOD for @realDonaldTrump for just walking away from the childish journalists sandbox. pic.twitter.com/6LmSS6nrUN

China Will Loom Large in Balkans Once Pandemic is Over

So much for religious and ethnic tolerance in Kosovo

Message from Brussels: Travel to EU countries with any vaccine

Who needs a third dose?

Taking off the masks – Not yet, but soon!

Is there immunity without antibodies?

Was Sweden right from the beginning?

Thus spoke Clark: NATO simply could not break that spirit