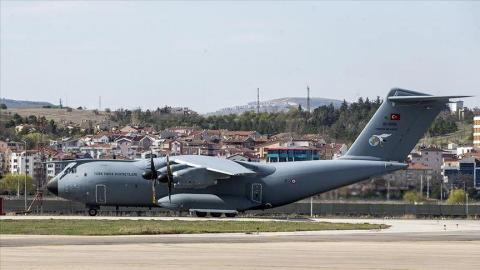 A Turkish military plane carrying medical supplies arrived in North Macedonia on May 12 to support the country's battle against the coronavirus pandemic.

"Turkish Armed Forces aircraft carrying medical supplies for use against COVID-19 has arrived at the Republic of North Macedonia," the Turkish Defense Ministry said on Twitter.

Earlier in the day, the aircraft left from the capital Ankara to carry medical equipment to North Macedonia and Albania.

"Turkish Armed Forces aircraft, carrying the medical supplies prepared at the direction of President Recep Tayyip Erdoğan by Turkish Red Crescent (Kızılay) for use against the COVID-19 outbreak, took off from Ankara Etimesgut
Airbase for Republic of North Macedonia and Albania," the ministry had said on Twitter.

Foreign Minister Mevlüt Çavuşoğlu last week said some two-thirds of the nations of the world requested medical supplies from Turkey to fight coronavirus, and nearly half of these requests were met.

The countries included the worst-hit ones such as the U.S., Italy, Spain, and the U.K., while Turkey remains the world's third-largest provider of humanitarian aid during the pandemic.

North Macedonia has reported 1,664 cases and 91 deaths so far, according to data compiled by John Hopkins University in the U.S. In Albania, there are 872 cases of the virus, with 31 deaths.