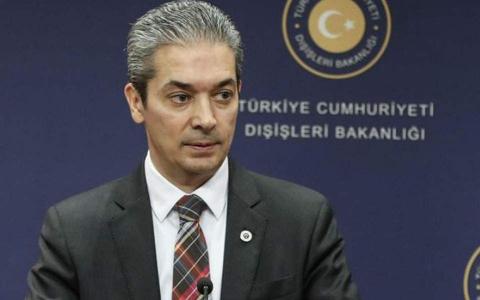 Ankara on Tuesday described the bloc comprising Greece, Cyprus, Egypt and the United Arab Emirates (UAE) as an attempt to create an "axis of malice" led by France.

The designation was given during comments by Foreign Ministry spokesman Hami Aksoy, who lambasted a declaration on Monday by the foreign ministers of Greece, Cyprus, Egypt, France and the UAE slamming "ongoing Turkish illegal activities" in Cyprus' exclusive economic zone (EEZ) and its involvement in the Libya crisis.

Aksoy said the joint declaration "is a case in point of the hypocrisy of a group of countries who are seeking regional chaos and instability through the policies they pursue and seeing no harm in sacrificing the democratic aspirations of the peoples to the callous aggression of putschist dictators, and which have fallen into a delirium, as their agendas are being disrupted by Turkey."