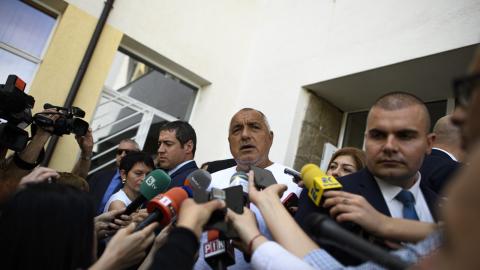 Bulgarian Prime Minister Boyko Borissov on Wednesday declined to accept ownership of the Football Club Levski, which was offered to him in a sarcastic manner by the exiled Bulgarian tycoon Vasil Bojkov, who is hiding in the United Arab Emirates after numerous charges were pressed against him in early 2020.

Bojkov said he was offering the Prime Minister the club as he was responsible for its financial hardships, because he had caused "the deliberate and illegal eradication of the companies providing for its maintenance".

Bojkov was referring to the way his business interests were seriously hurt after his National Lottery company was nationalised and numerous charges were brought against him.

The title deeds to the club were brought to the Council of Ministers by a well-known TV host, Sasho Dikov, who described himself as just a courier. Dikov claimed Bojkov had called him earlier to hand over the documents on Wednesday.

Borissov's office dismissed the offer of a 86.6 per cent share in the club as an insult. "The way in which this thing is happening is insulting, humiliating and it is absurd to send documents in this manner," the Prime Minister's spokesman commented.

Levski FC, one of the major football clubs in the country, has been in a dire financial state since Bojkov's arrest. From 1999 to 2006, he owned rival team CSKA Sofia.

In March 2019, he redirected his interests towards Levski. Ownership of the club has long been associated with political interests. Borissov is also known as a Levski fan, and at recent press conferences suggested the government might help to support the club.