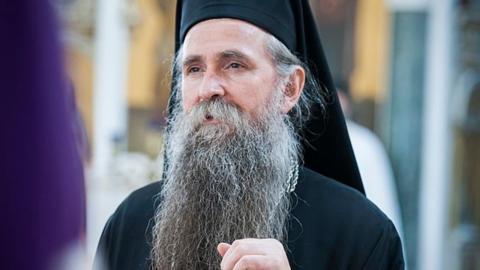 Bishop Joanikije of Niksic and seven other priests were placed in custody for 72 hours on Tuesday for violating the ban on public gatherings after they and Metropolitan Amfilohije led a procession in the town to celebrate St Vasilije's Day on Tuesday with thousands of believers.

As the police detained the clergy, several hundred angry people protested, chanting: "We won't give up our priests". The opposition Democratic Montenegro party called for a general opposition boycott of parliament in a press release. "All opposition MPs must boycott the plenary sessions until the priests are released. This is attack on the constitution and human rights," it said.

Public gatherings remain prohibited in Montenegro due to the COVID-19 epidemic, although religious processions may take place within places of worship. No more than 20 people may gather in front of the said church or place or worship. Media reports said Bishop Joanikije had called on believers to respect health measures during the disputed procession.

"I beg you to keep a social distance, so we can finish this procession in peace and love. We will pray to our saint to banish this disease from Montenegro," Joanikije said.

The conflict with the Serbian Church, the largest faith group in Montenegro, has drawn in the authorities in neighbouring Serbia.

Serbian President Aleksandar Vucic and Serbian Church Patriarch Irinej both called on the Montenegrin authorities to calm tensions and release the clergy. They also called on the large Serbian community in Montenegro to act peacefully and calmly in, as they stated, times when no reasonable person wants unrest and conflict.

During the coronavirus epidemic, police in...