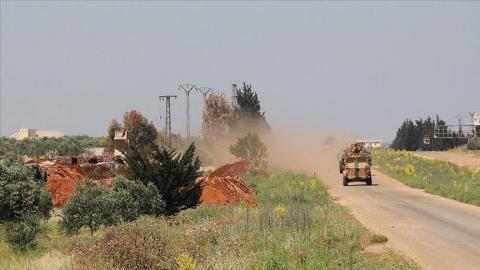 Turkish and Russian forces have carried out their 11th joint patrol along a key highway in northwestern Syria, Turkey's Defense Ministry said on May 14.
"Within the framework of TUR-RF Agreement/Protocol, the 11th TUR-RF Combined Land Patrol on M-4 Highway in Idlib was conducted with the participation of land and air elements," said the ministry on Twitter.
The agreement the ministry was referring to is a cease-fire deal brokered between Turkey and Russia on March 5 after weeks of armed conflicts between Turkish troops and Syrian regime forces.
The deal stipulated the establishment of a security corridor six kilometers to the north and six km to the south of the M4 highway, a strategic motorway that links Aleppo to Latakia. Turkey controls the northern strip and Russia the southern bank of the corridor.
Joint Turkish-Russian patrols agreed in the deal began on March 15 along the M4 highway from the settlement of Trumba — two kilometers to the west of Saraqib — to the settlement of Ain al-Hawr.
Idlib has long been under siege by the Assad regime forces and its allies, and previous cease-fires for the region were repeatedly violated.