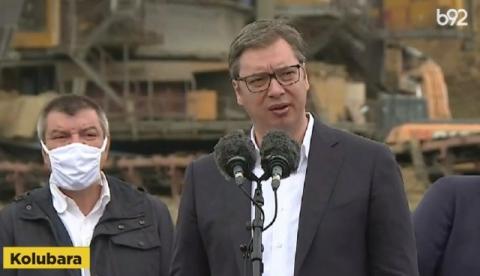 Answering the questions of the journalists about the accusation that "Serbia is waging a biological war against Montenegro", he said that you can only shrug your shoulders at such claims.
"I don't know what to tell you. I think it is normal not to use the police against political opponents, if they
do not use violence. For us, this is a terribly difficult situation. On the one hand, you must not interfere in the internal affairs of another country. On the other hand, it is a question of the Serbian Orthodox Church and a part of our people", he said and once
again expressed his misunderstanding for the detention of Bishop Joanikije and the Serbian Orthodox Church priests.
He had no answer to the research of the SeConS group, which presented data that about 200.000 people lost their jobs during the pandemic.
"Which group? What are you, who are you? I don't know what to answer you. You can come out with the information that four million people have lost their jobs, even though there aren't that many on the list of the employees," he said.
Vucic pointed out that three days ago he criticized certain municipal boards of the SNS, which called for mass rallies. He considers it irresponsible behavior.
"I know that many people from the SNS were angry with me, but I think that there is no need for such a gathering," Vucic said, commenting on the gathering of SNS supporters in front of the Assembly, while government and opposition deputies went on hunger strike. He added that showing superiority by
gathering as many people as possible will not be the case.