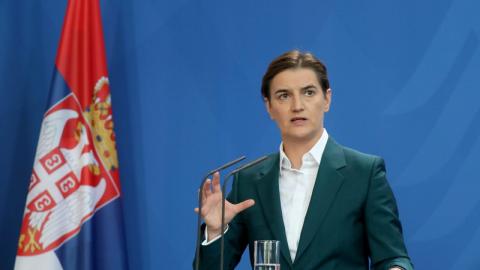 Serbian Prime Minister Ana Brnabic has dismissed claims made in a report by the international watchdog organisation Freedom House that Serbia is no longer a true democracy.

Brnabic insisted that Serbia was the most democratic state in the Western Balkans, adding that other international and domestic organisations had not ranked Serbia in a "non-democratic" category.

She was responding to Freedom House's newest Nations in Transit NIT 2020 report, which said that Serbia, Montenegro and Hungary no longer deserved to be classified as full democracies but as hybrid regimes.

In a 16-page letter to Michael Abramowitz, Freedom House president, headlined "Analysis of Freedom house Nations in Transit 2020 Report", with the subheading, "Rejecting claims about democratic regression in Serbia", which she said her "cabinet" had compiled, she said the report showed a distinct bias against Serbia.

"Given the fact that no other index of democracy has registered or hinted at such a democratic 'slippage' of Serbia into a hybrid regime in 2020, as well as the fact that most other Central European and Balkan countries have retained the same categorization in different indices, one can only conclude that the results presented in NIT 2020 have an inexplicable negative bias towards Serbia," her letter said.

Her analysis also compared Serbia's democratic ratings by Freedom House with those done by other international organisations, like the EIU Democracy Index or the BTI Index [Bertelsmann Transformation Index], which both classify Serbia as a democracy.

Brnabic also dismissed claims about increasing corruption made by Freedom House, again comparing them to other analysis. The Serbian leader accused the authors of making "one-sided observations and...