Disputed Truth: How Genocide Deniers Contest the Facts about Srebrenica 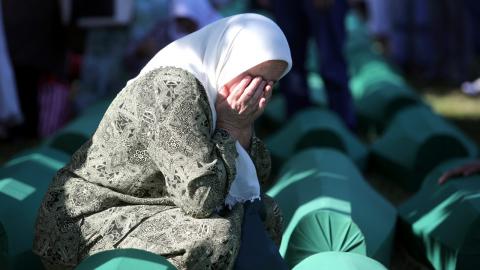 Genocide researcher Hikmet Karcic, who participated in the preparation of the report, told BIRN that two recent incidents showed that the denial of the Srebrenica genocide and of historical facts about the Bosnian war have moved into the academic-literary sphere at the international level.

Karcic cited the awarding of the 2019 Nobel Prize for Literature to Austrian author Peter Handke, an apologist for Serbian leader Slobodan Milosevic, and a recent book by American scholar Jessica Stern about Radovan Karadzic entitled 'My War Criminal', which critics have alleged is too accepting of the arguments made by the wartime Bosnian Serb political leader.

"What has been going on lately is that denial has been entering all layers of society in Serbia and [Bosnia's Serb-dominated entity] Republika Srpska and becoming highly acceptable in certain right-oriented academic circles in the West," Karcic explained.