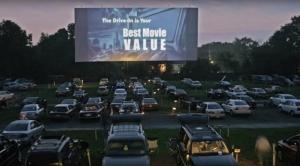 The first drive-in cinema to be held after the coronavirus epidemic in Slovenia has been organised by businessman Miran Starman, who got a green-light by the Health inspectorate.

His drive-in will screen films every evening in May, however the organiser plans to carry on into summer depending on the demand. Tonight's treat is a fusion of comedy, crime and action film directed by Adil El Arbi and Bilall Fallah.

The location, the venue of the Ljubljana auto trade show, will accommodate 200 cars tops. Visitors are advised to purchase tickets online, Starman has told the STA.

The programme will mostly include mainstream Hollywood productions as well as some indie and Slovenian films.

Meanwhile, Cinema Bežigrad has said that it has been given a go-ahead to hold a drive-in cinema at the Vič Centre parking lot. The venue fits some 70 cars.

Motion of no confidence in government temporarily withdrawn