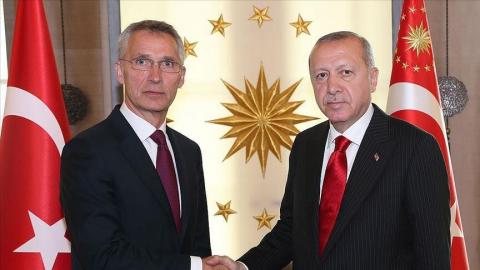 A written statement issued by the Communication Directorate late May 14 also said that the two leaders talked about the ongoing fight against the coronavirus and solidarity between the allied nations.

In a separate press release, Stoltenberg praised Turkey for helping NATO allies and partners with medical equipment over the past months to help combat the virus. "In these challenging times, it remains more important than ever to demonstrate allied solidarity," Stoltenberg told Erdoğan, according to the statement.

Turkey sent medical equipment to a number of NATO countries, including the United States, the United Kingdom, Spain, Italy and other countries since the pandemic hit the world.

On Libya, Stoltenberg reiterated NATO's readiness to help the war-torn North African country by building its defense and security capacities. The Erdoğan-Stoltenberg conversation came on the same day the latter explicitly lent support to the GNA.

In an interview with Italian daily La Repubblica, Stoltenberg acknowledged the fact that there is an ongoing arms embargo on Libya, stressing, "However, this doesn't mean to put on the same level the forces led by [Khalifa] Haftar and the government of Fayez al-Sarraj, the only one recognized by the U.N."

"For this reason, NATO is ready to give its support to the government of Tripoli," he said.

COVID-19 in India: Coronavirus Has Infected More Than 7.6 Million

OUTDOOR MASKS: See Where and When To Wear Mask in Bulgaria