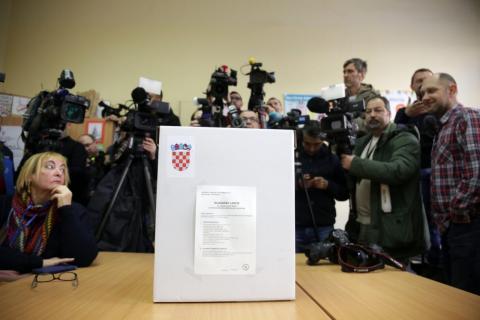 The Croatian parliament was dissolved on Monday on the proposal last week of six parliamentary clubs of the ruling majority, led by the centre-right Croatian Democratic Union HDZ, whose ratings have risen in the coronavirus epidemic.

President Zoran Milanovic will name a date for the parliamentary elections shortly. Most likely dates are June 21, June 28, July 5 or July 12. The election was originally planned for the autumn.

Political analyst Davor Gjenero told BIRN that the HDZ wished to hold elections as soon as possible, to capitalize on its relatively successful management of the health crisis. "It is the right of the ruling majority to seek elections at a time when it is most suitable for the ruling majority," Gjenero said.

The latest opinion poll showed that the HDZ has the support of 30.2 per cent of voters while the main opposition Social Democrats, SDP, are behind on 27.8 per cent.

"It is clear that the economic consequences of the 'corona crisis' will be felt in the last quarter of this year, and will probably be very strong in the first quarter of next year," Gjenero noted. The analyst said the timing of the election was also related to the risk of a possible new wave of coronavirus.

"The epidemiological situation in Croatia is such that we practically have less than ten [daily new] infections and, with all citizens behaving very responsibly, we will have the opportunity to organise the election within the constitutional deadline," Prime Minister and HDZ leader Andrej Plenkovic said last Thursday, after a meeting of the ruling coalition.