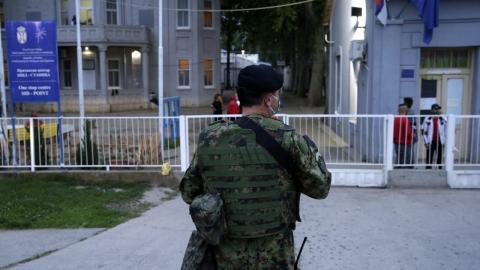 Rights activists working with migrants and refugees said they were unclear why the Serbian army had deployed in Sid, a border town hosting three migrant and refugees camps, as the situation was calm and no incidents had been reported.

Tomas D'Amico, an activist from No Name Kitchen, an NGO that helps migrant in the Sid area and is in the town, told BIRN that there were no known recent incidents or tensions.

"The situation here in the town and the surroundings is pretty calm. As far we we know, we do not have any incidents between migrants and locals," D'Amico told BIRN. "We still do not get the decision to bring the army here," he said.

Serbian authorities deployed the army in Sid to secure three migrants camps, one in town and two nearby, at the weekend. Defence Minister Aleksandar Vulin on Sunday referred to unnamed problems.

"We do not expect big problems but we want to help our citizens feel better, calmer, safer, and especially not to allow migrants who may be out of the camps to cause any problems," he said.

During the state of emergency imposed due to the COVID-19 pandemic, all camps in Serbia were put under army guard to make sure that no one was getting in or out of them. Following a number of such incidents, both army and special police units intervened in the camps.

Soldiers walk in formation as they approach the one-stop migrant centre in Sid in Serbia, May 16 2020. Photo: EPA-EFE/ANDREJ CUKIC

But, with the state of emergency now over, Serbia has returned to a resumed election campaign in which "the migrant issue" is one of the topics, with some opposition parties calling on the government to stop allowing migrants into country, or spreading theories that they could end up staying in Serbia for good.