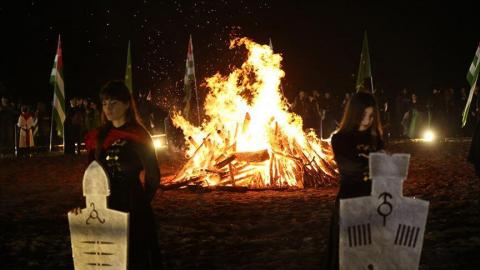 The Turkish Foreign Ministry reaffirmed Turkey's support to the territorial integrity of Ukraine on the occasion of the anniversaries of the Crimean Tatar and Circassian exiles.
"Turkey continues today, as in the past, to support the Crimean Tatar Turks to overcome unjust treatments they have been through and to live safely and in peace, preserving their identity. On this occasion, we confirm once again our support for the territorial integrity of Ukraine," said Foreign Ministry spokesperson Hami Aksoy in a statement on the occasion of the anniversaries of the Crimean Tatar and Circassian exiles.
The spokesperson recalled 76 years ago Crimean Tatar Turks, the "indigenous people of Crimea, were forcibly uprooted from their motherland and deported under inhumane circumstances."
A large part of 250,000 Crimean Tatars lost their lives either on the way or in exile and Crimean Tatars were not able to return to their motherland, the Crimean peninsula, for decades after the exile of 1944, Aksoy noted.
"The 'Circassian Exile' is another tragedy we recall with sorrow," he said, adding that 156 years ago, on May 21, the peoples of the Caucasus were forced to leave their homeland under dire conditions, resulting in many losses of lives.
"We share the pain of our kinsmen, the Crimean Tatars and the brotherly peoples of the Caucasus, respectfully honor their memory and wish Allah's mercy upon those who lost their lives during these tragic events which have left an indelible mark on our collective memory," he stated.
According to unofficial figures, nearly 1.5 million Circassians were expelled from their lands, while between 400,000 and 500,000 of them died.
The expelled Circassians mainly inhabited Anatolia and Rumelia and some of them also...