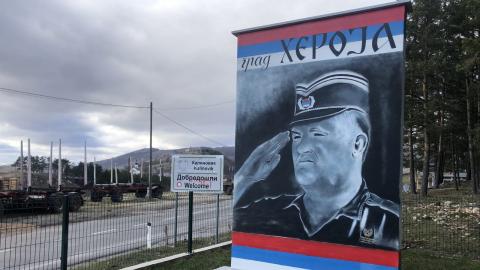 These are just a few examples of respectful tributes that have been paid to war crimes defendants and convicts in public spaces in Bosnia and Herzegovina over the past few years.

To establish the extent of the phenomenon, BIRN cross-checked all individuals accused of war crimes at the UN tribunal in The Hague or at the Bosnian state court with a list of all the country's roads and streets on Google Maps, as well as with statistical agencies, land survey institutions and local and entity authorities, and by making visits to relevant sites.

Naming streets, buildings and parks falls under the responsibility of local authorities, although streets are rarely named after a living person or someone who died recently. One of the criteria for naming a street after someone is that they must have made a significant contribution to the history of Bosnia and Herzegovina.

Milica Pralica of Ostra Nula, a civic activism and human rights group, said that giving legitimacy to war criminals sends a message that certain crimes did not even happen and perpetuates a "narrative which has existed since the 1990s".

The best-known example is the student residence in Pale in Bosnia's Serb-dominated Republika Srpska entity that was named after Radovan Karadzic in 2016. The president of Republika Srpska at the time of the incident, Milorad Dodik, said that it represented "a gesture of support" for the man who "laid the groundwork" for the entity. Karadzic became Republika Srpska's first president in 1992, not long before the war broke out.

Only a few days after the student residence was named after him, Karadzic had been convicted of the genocide of Bosniaks from Srebrenica and war crimes throughout Bosnia and Herzegovina in a first-instance verdict.