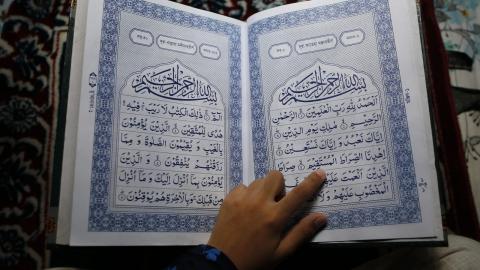 After making several unsuccessful attempts to cross the Croatian border into the EU, his odyssey remains unfinished.

Meanwhile, he is spending the holy month in a camp that he cannot leave at all now due to the movement restrictions imposed in Bosnia because of the coronavirus.

IOM says it is doing its best:

The photo BIRN received from migrants and refugees in Krnjaca camp, Serbia.

During Ramadan, Muslim believers fast from the sunrise until sunset, when they break the fast for a family or public dinner, called the iftar. Another meal, suhur, may be consumed in the early hours of dawn.

Muslims also attend communal prayers several times in a day in Ramadan. At the end of the month, all believers meet in mosques for the first morning of Eid al-Fitr, a three-day festival, when believers flow out into the courtyards and streets.

None of that is practical in a camp in Bosnia, where various coronavirus restrictions remain in force. Foreign citizens may not enter the country, for example, and the Federation entity of Bosnia has also extended certain measures until May 15, including bans on the outdoor movement of people over 65 and under 18. They can move around only on certain days.

According to the latest report by the Border Violence Monitoring Network, BVMN, EU border countries like Croatia, which have been accused of conducting illegal "pushbacks" of migrants and refugees trying to enter from Bosnia and Serbia, are continuing the practice.

"A relatively new development in pushback practices is the tagging of groups with orange spray paint," BVMN said, referring to two events at the beginning of May, when...