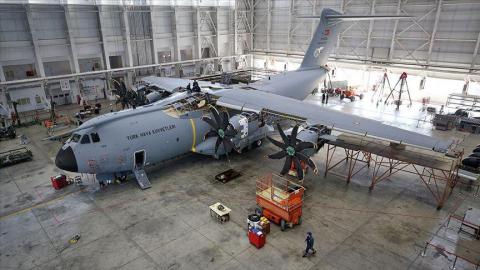 A Turkish military airbase in the Central Anatolian province of Kayseri has launched the second maintenance center for Airbus A400M tactical transport planes, according to an official.

"Up to day nine of the aircraft have been added to our inventory. The 10th plane is planned to be added to the inventory in 2022. Not only the procurement process of these nine planes, but also the maintenance and sustainment works are also carried out by the 2nd Air Maintenance Factory Directorate," Lt. İsmail Barış Sağlam, an A400M Retrotif Project officer, told local media on May 19.

For the first time, heavy maintenance of the massive plane, which has a ticket price of 100 million euros, was done in a place other than the producer Airbus' facilities, according to Sağlam.

"Both the maintenance time and economic cost have decreased after gaining A440M planes maintenance capability by the 2nd Air Maintenance Factory Directorate," he added.

The A400M troop and cargo plane was developed for seven European NATO nations - Belgium, Britain, France, Germany, Luxembourg, Spain and Turkey - at a cost of 20 billion euros ($22 billion). It entered service in 2013 after a delay of more than three years.

Turkey is a 5.5 percent shareholder in the A400M program, with Turkish Aerospace Industries Inc. (TUSAŞ) supplying fuselage and wing parts for the plane to Bremen, Germany and Filton, England for integration before final assembly in Seville, Spain.

Sağlam said that they were also planning to implement design adjustments in accordance with feedback from users.
"It will be only us carrying out this application, called retrotif, other than Airbus," he said, adding that those works will begin at the end of this year