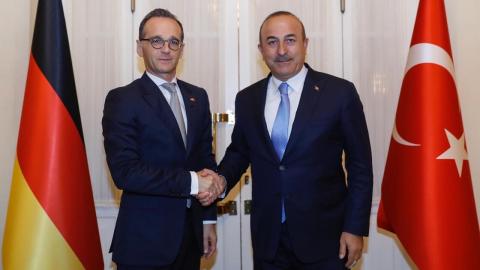 Turkey and Germany have been engaged in talks for cooperation in the field of tourism for the coming season as the former says Turkish resorts are the safest destinations for European tourists as the country has taken the spread of the COVID-19 pandemic under control.
Foreign Minister Mevlüt Çavuşoğlu held a phone conversation with his German counterpart Heiko Maas on May 19 to discuss tourism as well as bilateral relations and Turkey-EU ties, according to Anadolu Agency. The foreign ministers' dialogue follows a phone conversation between President Recep Tayyip Erdoğan and German Chancellor Angela Merkel last week.
"Everybody in Germany underlines Turkey as the securest touristic destination this year," Çavuşoğlu told a local TV in an interview late May 18. Stressing that he is in talks with his counterparts from the countries where Turkey traditionally attracts tourists, including Russia and Germany, Çavuşoğlu stressed the importance of the continued flow of tourists to the Turkish resorts for the local and national economy.
"Germany has to open airports," he said, adding, "Turkey should not be excluded at a time when the EU is discussing what can be done [for tourism]."
The Turkish foreign minister's remarks come amid reports that EU countries are working on a plan to encourage its citizens to spend their summer holidays within the EU boundaries in order to avoid the 14-day quarantine rule upon their return.
"We perfectly know how tourism is important as a source of income for our country," the minister said, describing the ongoing crisis as the biggest one since the Second World War.  Turkey hosted more than 50 million tourists and generated around $34 billion income in the year of 2019. Russia sent more than 6 million and Germany more...