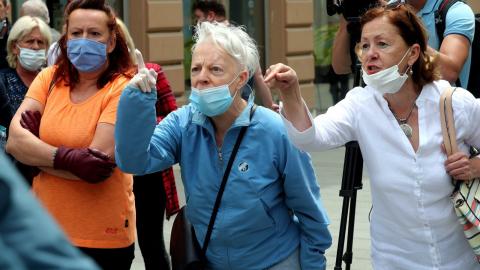 Some also noted that this controversial issue might have been deliberately politicised and used to fuel party campaigns ahead of elections that will be taking place across the region in the coming months. Croatia and Serbia are to hold general elections at the end of June while Bosnia is scheduled to have local elections in October.

But others commended the absence of violence and the level of restraint showed at both events, as well as in the public debates that preceded and followed them. In these difficult and tense times, highly controversial issue could easily cause violent protests in any Western democracy, be it the US, France or Germany, yet the opposing sides in the Balkans remained peaceful and relatively civilised in their disagreements, some argued.

The commemoration rally in May 2018 near Bleiburg in Austria. Photo: EPA-EFE/ALEX HALADA.

The annual large-scale Bleiburg commemoration is usually held in Austria but was cancelled this year because of movements on restriction imposed to curb the coronavirus pandemic. Instead, small commemorative masses were held in Bleiburg, Sarajevo and Zagreb.

However, the tensions and public uproar over the commemoration were not surprising given the fact that this was one of the most controversial episodes in the history of the former Yugoslavia.

Following the capitulation of Nazi Germany at the beginning of May 1945, tens of thousands of Croatian Nazi-allied Ustasa troops and other collaborationist units, accompanied by thousands of Croat and Slovenian civilians, fled before the advancing communist-led Partisan forces towards Austria.