Haftar forces to withdraw from fronts south of Tripoli 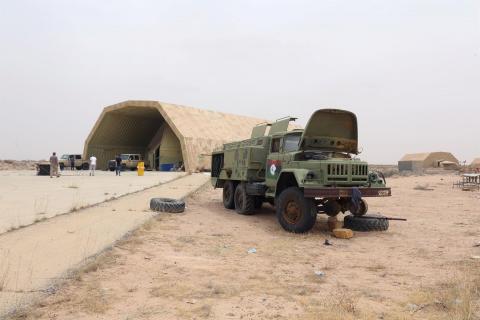 The spokesman for Libyan warlord Khalifa Haftar's forces announced early on May 20 that as of midnight they would be withdrawing 2-3 kilometers (around 1.8 miles) from fronts south of Tripoli.

Ahmed Al-Mismari said on social media they will be pulling back so people in the capital can celebrate the Muslim Eid al-Fitr holiday, which marks the end of the holy fasting month of Ramadan.

There was no information on loss of lives or damage.

Meanwhile, the Libyan army on May 20 destroyed a Russian-made air defense system used by forces loyal to Haftar in the city of Terhune.

Abdul-Malik Al-Madani, spokesman for the government-led Volcano of Rage Operation, told Anadolu Agency that the Pantsir missile system, which was supplied to Haftar's militias by the United Arab Emirates, has been demolished.

Images of an unmanned aerial vehicle of the Libyan army targeting a hangar were also shared on social media and in the local press.

The Libyan army had announced that after capturing the strategic Al-Watiya airbase in the western part of the country from Haftar's militias, they had captured an air defense system of the same type as the UAE had provided to the militia.

Haftar, the leader of illegal armed forces in eastern Libya, has intensified attacks on civilians since the beginning of May as the Libyan army recently gained an advantage and inflicted severe losses on his militants.

The government has been under attack by Haftar's forces since April 2019, with more than 1,000 killed in the violence. It launched...