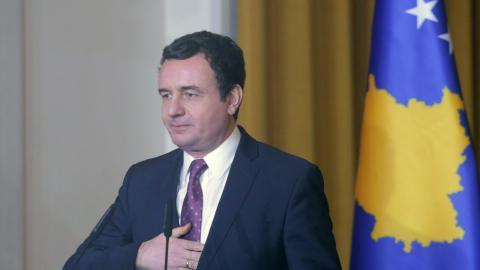 Kosovo's incumbent Prime Minister, Albin Kurti, on Tuesday night condemned a death threat he said he had received from a phantom organisation called the "Albanian Volunteers' Guard", as the country edges close to the Constitutional Court ruling on his request to annul President Hashim Thaci's decree mandating Avdullah Hoti to form a new government.

Kurti, who wants fresh legislative elections following his government's ousting in a no-confidence vote on March 25, published a statement from the organisation, which demanded that he and his Vetevendosje party abandon any plans for protests if the upcoming Constitutional Court verdict does not suit them.

"Kurti and the whole Vetevendosje leadership who are helping to organise this protest have reason for concern about their and their families' safety from the Guard," the statement allegedly read. "We will act if needed," it added.

When Kurti's government removed the metal fences put up to protect the government building in April, many on social media predicted that the Vetevendosje party was planning to return to its protest roots if it is denied a snap election.

President Thaci opposes fresh elections and wants Hoti, from the Democratic League of Kosovo, LDK, to form a new coalition government from the existing parliament.

On May 12, some 500 Vetevendosje supporters created an almost perfect square in the centre of Pristina in what they called a "protest rehearsal" that they insisted did not violate social distancing restrictions designed to combat the spread of COVID-19.