We haven't discussed penalties, Kawasaki syndrome is triggered by the infections 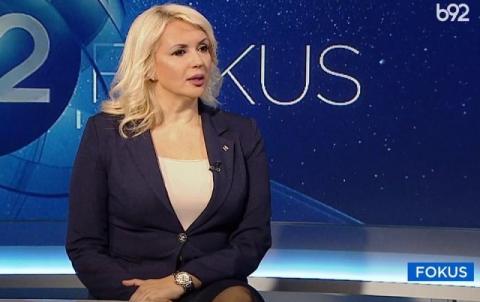 "Today's workload is 100 cases, the largest part refers to Vranje in one work organization. 39 of them are direct, family contacts with people who became infected in the company," she told B92 television.
According to her, the case of Vranje showed how the coronavirus spreads quickly if protective equipment is not used and the rules are not followed.
As she said, we have had two hotspots discovered in the last few days, and if that had not happened, the epidemiological situation would have been completely calm.
"It would be a completely different situation if it was scattered throughout Serbia, but we have two collectives," she explained.

We havent even discussed introducing penalties for not wearing masks

When it comes to protective face masks, she said that they should be worn by those who are indoors, as well as medical staff.
"It makes sense to wear masks indoors, where a lot of people stay. It is recommended to wear it while going to banks, post offices, shops, public transportation as well as when it comes to work organization," Dr Kisic Tepavcevic said.
She added that a distance of two meters is enough for prevention.
"I must mention that we did not talk about penal policy, it is not generally popular nor has long-term effects. But we start from the fact that our health is most important to us and it must be more important than some punishment," she concluded.
Speaking about collective immunity, Dr Kisic Tepavcevic said that a big step forward is that it is not zero percent, but we are far from the degree of collective immunity that will protect us from the spread of the disease.
"The first data from countries examining collective immunity were disappointing compared to the expectations they...