Why a Theatre’s Demolition Has Sparked Outrage in Albania 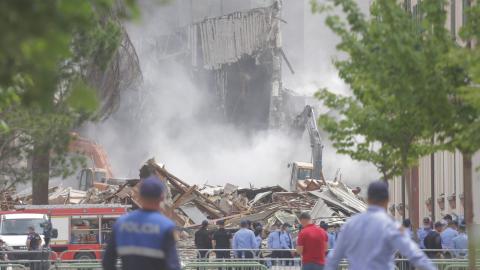 Critics say the demolition of the National Theatre is an old project of Prime Minister Edi Rama, since the time when he was Culture Minister in 1998 and proposed to build a tower in its place and incorporate the theatre inside.

The renewed bid to demolish the theatre divided artists and activists, and raised concerns among anti-corruption and heritage watchdogs.

Notably, a core group of activists, gathered under the Alliance for the Protection of the National Theatre, led a 27-month "occupation" to protect the building from demolition, prompting the heritage NGO Europa Nostra to list the theatre as one of the seven most endangered heritage sites in Europe in 2020. The heritage watchdog described the building as "an outstanding example of modern Italian architecture".

The theatre complex was a historic landmark for Tirana, a city doomed by greedy developers and wildcat construction in recent decades, but the proposed public-private partnership also smelled like a rat.

Protestors clashes with police during a protest against the demolition of National Theatre in Tirana, Albania, 2020. Photo: EPA-EFE/Malton Dibra

The company behind the development is the main contractor of the Municipality of Tirana and has been accused of nurturing corrupt ties with city officials. The proposal also appeared to undercut the market value of the land, with which the contractor would be paid for the construction of the theatre by tens of millions of euros. The proposed real estate development also seemed to go against earlier electoral promises by Tirana Mayor Erion Veliaj not to clog the city centre with more concrete towers.

The government first proposed to pass the agreement through a special law in parliament, but its procurement process was...