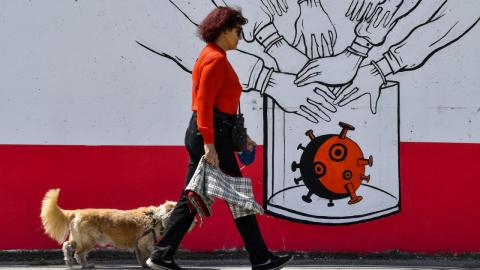 As Europe starts to ease itself out of the COVID-19-related lockdown, some countries in the Western Balkans also hope they have seen the worst of the pandemic.

Montenegro and Croatia have either not registered any new cases of COVID-19 for days, or have marked only single-digit numbers, prompting a gradual easing of movement restrictions and safety measures.

But in most parts of the Balkans, the fight against the coronavirus seems far from over, with numbers in some countries beginning to climb back up again.

North Macedonia experienced a shock on Thursday when the Health Ministry reported 40 new cases over the previous 24 hours. Over the past two weeks, the country had not cut the number of cases below 20 per day, and it has still not declared an end to the state of emergency.

The latest number recalled the peak of the crisis in April, when the country had 40 to 100 new cases of infection per day. The virus has already taken 111 lives. Three people died on Wednesday and one more on Thursday.

This puts North Macedonia in an odd situation as the political parties have already begun intense debates about whether to hold previously postponed early general elections in June.

In light of the persistent infection rates, the authorities are mulling re-introducing another two-and-a-half day curfew over the weekend and on Monday, on top of the existing night-time curfew that starts at 7pm.

Serbia this month cancelled most of its restrictive measures, including curfews. Entering Serbia will also be possible without a negative PCR test from Friday May 22, and some medical facilities that were transformed into so-called COVID-hospitals are going to restart normal work.

But although the numbers...