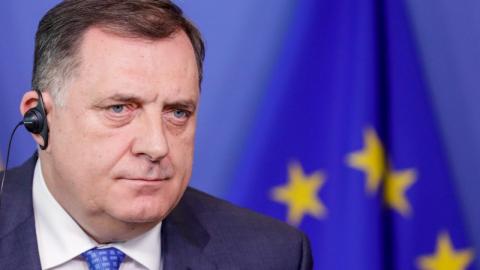 After criminal charges were filed against him by opposition parties and a local transparency watchdog, Dodik said the claims were absurd. "That is what they in the opposition would call a performance, or what ordinary people would call a joke," Dodik said.

The charges came after Dodik told parliament in the mainly Serb entity of Bosnia, Republika Srpska, on Wednesday night, that he often listened in to telephone conversations between representatives of the opposition parties, saying it was normal practice.

"Every government listens to the opposition, and recounts the content of telephone conversations of opposition members," Dodik claimed

He also said the Republika Srpska Interior Minister, Dragana Lukac, delivered the contents of these calls to him, which Lukac on Thursday denied, insisting there was no illegal wiretapping in the RS. "There is no wiretapping, especially of MPs," Lukac told the RS parliament on Thursday.

Opposition parties insisted that Dodik had openly admitted to breaking the law.

"Dodik has admitted that he committed and continues to commit the criminal offence of unauthorized wiretapping of third parties, in this case, members of opposition parties," Branislav Borenovic, leader of the opposition Party of Democratic Progress, which filed a criminal complaint against Dodik, said on Thursday. He added that, in a normal country, Dodik would be immediately arrested and questioned.

"This is a member of the presidency who has admitted a criminal offence in front of the rostrum of the highest legislative body. Since the competent authorities...