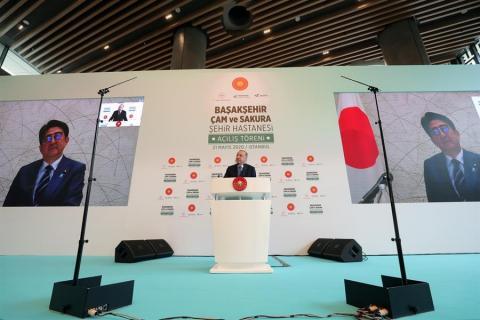 Speaking at the inauguration of the hospital, Erdoğan said that it adds to the deep-rooted and multidimensional Turkish-Japanese friendship.

Touting the brand-new facility, Erdoğan called it "one of the proud monuments of Istanbul not only in terms of aesthetics, but also with its technological infrastructure, associated buildings, location, facilities and other features."

Such hospitals put Istanbul on the international map in terms of health care, he added.

Başakşehir City Hospital, which has the capacity to serve up to 35,000 outpatients a day, will play a crucial role in the fight against the coronavirus, Erdoğan said, noting that due to its physical proximity to the mega Istanbul Airport, the facility will also welcome international patients as well.

"Turkey and Japan are setting examples of success at a time when health systems are crumbling. We are able to provide uninterrupted health services. We do not lack any medical equipment," Erdoğan said.

He also noted that the number of recorded daily coronavirus cases in Turkey dropped below 1,000 and said that Turkey has sent medical aid to 82 nations.

"We will continue to mobilize all our resources available for the humanity," the president added.
Erdoğan thanked Abe for joining him in the inauguration of the hospital.

For his part, the Japanese prime minister wished well to the Turkish...