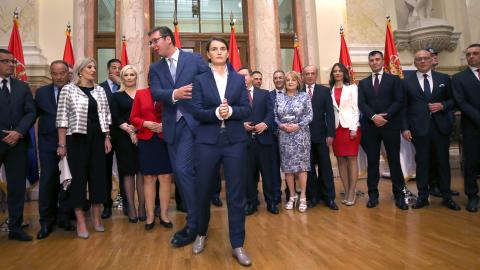 In 2017, when Ana Brnabic became not only Serbia's first female prime minister but its first openly gay head of government, the world marvelled at how such a conservative Balkan country could make such a progressive step.

In Serbia, however, few shared in the enthusiasm.

To the conservative base of the ruling Progressive Party, SNS, there was widespread confusion over the promotion of a lesbian non-party technocrat to what under the Serbian constitution is the most powerful post in the land.

Liberals, meanwhile, puzzled over why President Aleksandar Vucic, not known as a champion of human rights or defender of the LGBT community, would make such a bold and potentially risky move.

Three years on, there is little confusion.

Brnabic has emerged as a firm Vucic loyalist, allowing him free rein over the government from the ostensibly ceremonial post of president while keeping would-be challengers from within the Progressive Party at bay.

A 44-year-old UK-educated businesswoman with no prior record in politics or LGBT activism, Brnabic has adopted Vucic's uncompromising tone on a range of issues, from genocide-denial to media freedom, disappointing those inside and outside Serbia who hoped her appointment was evidence of Vucic's abandonment of his political roots in the chauvinism and ultranationalism of the 1990s.

Brnabic was picked for her "liberal image", said political analyst Boban Stojanovic, but there has been nothing liberal about her behaviour in office.

The prime minister, he said, has become simply "an extended hand of Aleksandar Vucic."

"It was just a theatre play - of course Serbia is not a liberal country."