Week in Review: Times Too Interesting 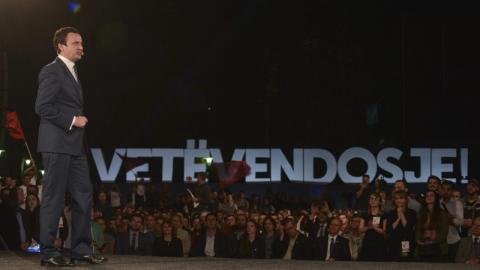 Kosovo is awaiting nervously a Constitutional Court ruling which should determine whether Kosovars will get a new government or go to early elections following a vote of no confidence in the outgoing government of Prime Minister Albin Kurti. While Kurti's Vetevendosje insists on early elections, almost all other parties are opposed to this.

Rumours persist that, if it is denied an early election, Vetevendosje could return to its protest roots. Given its history of mobilizing large - at times violent - protest rallies, this prospect has many political analysts in Kosovo nervous. While some argue that this will be an important test of Vetevendosje's political maturity, others fear that Kosovo might be in for an interesting period ahead.

Ana Brnabic announced as a new Serbian PM in 2017/EPA

As the mandate of the current Serbian Government comes to an end, we take a look at how Prime Minister Ana Brnabic has fared in the job she has held since 2017. When she was appointed Prime Minister, Brnabic ticked several 'first' boxes - first female Serbian Prime Minister, but also the first openly gay one.

The outside world seemed both surprised and impressed by the appointment. Yet in Serbia, there was far less excitement. In our analysis, we take a look at how she has fared relative to the hopes and expectations of others. One thing is certain - she has proven a loyal choice.